ROAD TRIP - CARIBBEAN: Or, How We Got Through Sint Maarten Customs with a Costco Card and a Smile

"Then there are people who prefer to travel light. They are happy with what have about them and where they find themselves; they carry everything they need with themselves, or rather within themselves. They are life's backpackers..."
- Jonathan Bastable, writing in PURE ST BARTH

We have had quite a number of adventures in our travels. To us it's part of the overall On the Road experience, and an essential element to getting into the spirit of locality. Some tend to be more stressful than others, and some things should never be left to chance.

A number of years ago -- before stricter laws were put in place -- it used to be possible for an American to travel around the Caribbean using only a photo drivers license as identification. In those friendlier and less paranoid times, before the TSA turned every American airport security checkpoint into a regional Customs facility, getting from point A to point B between islands and the mainland U.S. was a relatively simple affair. Show up with your ticket, luggage and an ID card of some kind and you were whisked through to your flight in an efficient and relaxing way.

One of our favorite destinations in the Caribbean is the tiny and very chic island of St Barthelemy. Known as St Barth -- or Bart depending upon how "in the know" you are (the regulars and locals prefer the H, while the media insist it is better without) -- the island is typically too expensive for our budget to consider any kind of regular visit, but a location which we had wanted to get to for some time. So, in 2005, we selected St. Barth as the "confetti check" destination in an extensive trip marking our 20th wedding anniversary. It was, in a trip of indulgences, the ultimate indulgence. We were there for three nights, and celebrated our anniversary with dinner at the Eden Rock Restaurant. The Eden Rock is a world class culinary destination perched atop, yes, Eden Rock , which juts out into Baie St Jean a hundred yards or so from our own hotel, the Emeraude Plage.

Unlike a number of the other islands, particularly nearby St Martin/Sint Maarten, St Barth is largely a passive experience. You go there to relax, to experience. There are a few party places at night -- Le Ti St Barth being the trendiest during our stay -- but they are few and far between. The mood is one of cool and casual elegance, with none of the big scale trappings of your typical tourist resorts. Beverly Hills or Monaco without ostentation. In short, St Barth is an expensive but worthwhile destination, only a short hop from Saint Martin/Sint Maarten -- and between the two you can easily fill a week or two off the grid and away from the world.

(For you foodies, St Barth and the upper Saint Martin town of Grand Case are de rigueur Caribbean destinations. But I digress.)

As all things must, our three night stay in St Barth came to an end and we faced the prospect of continuing on our island hopping tour to the next destination, San Juan, Puerto Rico. (We rarely stay in one spot for more than three days…not sure why that's become something of a limit, but our usual plan of attack has us moving on to the next interesting spot in short order. Almost all of our trips consist of three or more one to three night explorations versus weeklong stays at any one place.) In this case, we had a connecting flight through Sint Maarten to San Juan. (This is where that "photo ID" thingy comes into the equation and discussion.) 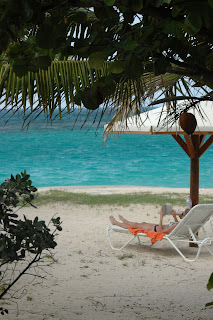 As our flight left in an hour or so, we sadly packed ourselves up, gathered our belongings and bid goodbye to the hotel staff, who had been terrific during our stay. We drove our tiny little rental car -- there are no rental cars other than tiny little ones on St Barth -- back up the hill to the airport, turned it in and checked in for our flight. All of which took little more than twenty minutes owing to the small size of the island and the airport itself. Very smooth, and very convenient.

We arrived at St Barth Airport, a smallish affair featuring one of the most terrifying approaches at any commercial airport in the world. The pilot must navigate a gauntlet between two hills, narrowly brushing an active traffic circle at the crux of the hills, dive down a steep slope to the near end of the runway -- which is itself sloped downward toward Baie St Jean. It's enough of a challenge that flyers will often come over on the puddle jumper from Sint Maarten just to experience the landing. On our own arrival a few days before a young man from France had purchased a ticket exclusively to see the landing, and the pilot was happy to oblige. Not the best thing for my own nerves, but at least we lived to tell the tale.

(Video of a typical St Barth landing can be seen here: http://www.youtube.com/watch?v=2IObZQvdH7g )

As we were readying to board our hopper flight, my wife suddenly announced she couldn't find her driver's license. Obviously she'd had it when we arrived, since we had gone through Customs without a problem. We began tearing apart our bags looking for the missing ID, and finally, giving up hope, asked the local authorities if this would be a problem getting into Sint Maarten for our connecting flight. They shrugged and said "it depends". Not the sort of reassurance you want under the circumstances. With too little time to race back to the hotel, we boldly climbed on board our flight and hoped for the best once we touched down. It was the Caribbean, after all, and they'd shown themselves to be willing to work things out for the traveler. Our biggest concern was for the subsequent flight and arrival in San Juan, since we were certain that the Puerto Rican authorities would be far less understanding given the TSA's presence and requirements for re-entering U.S. territory. Despite our years of travel, we were nervous about the outcome.

Given little choice in the matter, we rode the twenty minutes to Princess Juliana Airport and deliberately put ourselves at the tail end of the Customs line, figuring it would be the kindest thing we could do to the other passengers who might be less than patient with the Americans who lacked proper identification when traveling abroad. Nervously we approached the Customs agent and started to explain the situation. Our luggage was out of reach on the carousel just beyond the checkpoint, so we were unable to do any last-minute checking. As we explained the situation, the agent understood and asked if my wife had any other forms of photo ID. We went through a few options left to us, including producing my wife's business card, which has her picture on it. No go. Nothing else? The agent was clearly working with us on this, so in a last, desperate attempt to comply, my wife produced her Costco card, which had a photograph that, at best, might be considered a rorshack portrait. The agent looked at the card, asked who Costco was, and then held up the card and my wife's business card to her manager, asking if this was acceptable. After a cursory glance, he nodded and we were through!

The relief was short lived, as we ran to the carousel and gathered our gear. As we got the bags and began sorting, readying ourselves for the next leg which required checkin on another airline and the hour or so flight to San Juan, we decided to lighten the load a bit. One of the bags we'd checked was an empty over the shoulder zipping towel bag of the colorful type you see universally on tourist beaches around the world. We brought it along in the event we needed a bag for souvenirs or other additions, and it was becoming more and more a burden to toss around with the rest. So, it being a relatively inexpensive bag, we decided to donate it to the island's trash dump.

My wife opened the bag to check it one last time before we tossed it in a nearby bin and suddenly hooted with delight. The ONLY thing left in the bag, sitting at the very bottom and partially tucked under a flap, was her driver's license. How it had gotten there we couldn't fathom, but there it was just seconds from being binned. A wave of relief swept over us, and my wife ran back to yell to the now-busy Customs agent "We found it!!".

The agent looked up from the passenger's documents she was examining, grinned broadly and waved back at us, yelling "Welcome to Sint Maarten!" as a response.

(There is no question we would have been in trouble today, eight short years later. Customs has become a lesson in bureaucratic paranoia, making such adventures a virtual impossibility -- and severely restricting the ability of considerate Customs agents to recognize a situation and respond as human beings rather than government authorities. Yes, I recognize it's a changed world, but we limit ourselves in the process of trying to limit others and that's a genuine shame. Adventures like these -- a situation anyone could find themselves in -- are now far more dire and stressful than they need to be.)

We made our connector on time, and spent the next few days in Viejo San Juan before moving on. Our two and a half week trip took us to an astounding seven destinations across four islands and part of the Eastern Seaboard, close to but not a record for our travels. (For the record, it's 13 stops in four countries over three weeks in 2011, five of the places visited via cruise ship.)

I'll share some more of these sorts of things in the coming months. We're setting plans for our 2014 voyages at the moment, the entirety of which seem to be around oceans and water-based activity. More details about those later on as well.

(I worry at times that I will run out of things to talk about on the Thumbnail Traveler, but so far I am well shy of running dry and so far you guys don't seem to be too terribly bored by the blathering.)

Thanks, as usual, for checking in.

A few fun links for your St Barth daydreams:

Posted by The Thumbnail Traveler at 4:19 PM