“Whatever a guidebook says, whether or not you leave somewhere with a sense of the place is entirely a matter of smell and instinct.”
― Frances Mayes, Under the Tuscan Sun


We all tend to travel with preconceived notions of what a particular destination might look, smell and be like. Usually we're wrong. 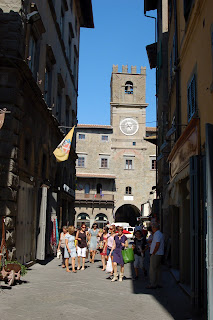 These images are often fed, and in fact created, through the entertainment industry. Television programs such as THE AMAZING RACE, NO RESERVATIONS and THE BEST OF… are travelogues which are designed to give us a taste of a particular place -- but are more akin to what in the restaurant industry is called an amuse bouche -- a single, bite sized appetizer rather than a full blown meal. In other cases, and as I've mentioned in many a previous column, films are an excellent source of inspiration. But since most films are trying to tell a story, it's rare that a locale is such an integral part of the story that the film compels us to seek out a place and explore it further.

UNDER THE TUSCAN SUN is one such film.

(Okay, okay, I can see all the guys reading this rolling their eyes and muttering "but that's a chick flick" under their breath -- or, standing on their desk screaming it at the screen. You know who you are -- and it is. No question. Like every married man I find myself periodically in a theater watching such things, and I'll admit there are moments where I wonder what the heck I am doing. On the other hand, my wife also happily accompanies me to James Bond films, so there's little room for complaint. And certain chick flicks do an outstanding job of conveying the essence of a place to the extent the location becomes much more than a setting, it becomes a member of the cast. And again, UNDER THE TUSCAN SUN is an example of this.) 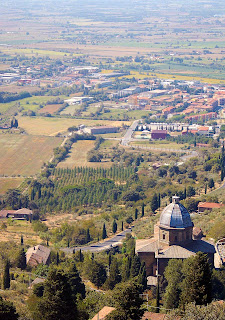 For those of you who might not have glimpsed this particular film (guys, shame on you. At the very least it has the ever-watchable Diane Lane in your eyesight for a couple of hours, which is hardly a bad way to spend an afternoon. And it features two different Italian towns in starring roles which ultimately encouraged my wife and I to visit them on our first trip to the Italian peninsula. 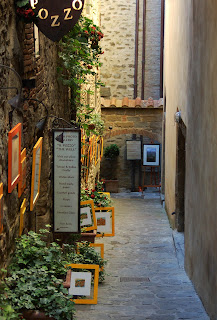 The first of these towns, the one which inspired the title of both the book upon which the movie is based and the film itself -- the town under the Tuscan sun -- is Cortona, a beautiful hilltop town along the southeastern edge of Tuscany. From the rotary parking area at the southern edge of town you can stop and look out across a literally stunning landscape of towns and farms, with hills and lakes in the distance. As much as anywhere in this part of Italy, this is truly a view worth traveling for. Plus, once you're done marveling at the beauty of Tuscany, you can retreat into the heart of Cortona along its main market street -- a walking avenue of restaurants, boutiques, shops and alleyways that lead the shopper to the central Cortonese square(s) (there are, in fact, two adjacent squares which make up the center of town.) Much of the movie was filmed in this central plaza, and if you're familiar enough with it you'll recognize the wide stone stairway that is featured in several scenes. (Don't be too disappointed that the fountain which plays an important role in the movie is absent. Evidently it was brought inky the film crew specifically to anchor the Fellini scene. It doesn't really exist, though it should.) 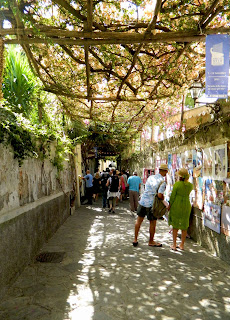 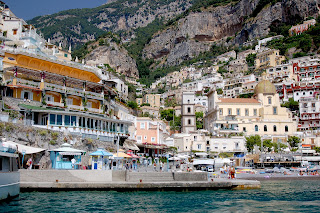 The second destination featured in the film is certainly worthy of the two hour drive south of Rome is the Amalfi Coast town of Positano, which clings as a man-made cascade down a seaside cliff along the edge of the Tyrrhenian Sea. 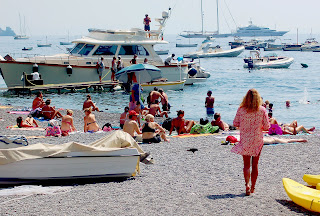 In the film TUSCAN SUN (UTTS for short?), Positano is shown to be a seaside paradise of simple family dinners along the beach. In truth, it's somewhere between that and a sophisticated, modern tourist and travel mecca, with elegant shops and boutiques lining a wisteria-drenched alley winding its way up through the heart of the town. Along the waterfront are a number of cafes, along with a vibrant artistic trade -- both in shop on along the streets.

Perhaps in the off-season it quiets down and is truly the family-oriented seaside retreat depicted in the movie, but during tourist months it's a bit more crowded and noisy, though still every bit a special destination for the discerning traveler. 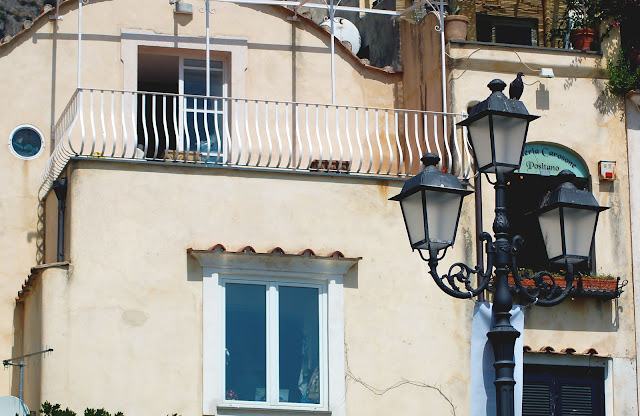 Posted by The Thumbnail Traveler at 10:21 AM